We wanted to do a sort of Thanksgiving episode. However, Thanksgiving isn’t for another couple weeks, so we did ComixGiving.  We used it as a good excuse to get together with some cool people and stuff ourselves silly, while managing to film a segment on how to make our cocktail.

With the amount of food about to be had, we decided Chew would be the perfect comic to focus on, and in honor of the only food Toni Chu can eat that he does not get a psychic reading on, we made an Old Fashioned Beet Down cocktail, with Claire’s homemade Beet Simple Syrup.

Kate and  Claire give you the Beet-ails on how to make this sweet drink.

Detective Tony Chu receives psychic readings on anything he eats. Because of this, he often resorts to cannibalism in the name of justice, often tasting pieces of human bodies to piece together murder cases.  The story is lighthearted and chock full of dark humor by John Layman, and the stylized art that perfectly accompanies the tone of this series is done by Rob Guilllory.

On a whim after last month’s review on Helheim for Halloween, we reached out to artist Joelle Jones and casually asked if she would like to come to the home of strangers in Portland and partake in a ComixGiving dinner where we get her drunk and celebrate a book about Cannibalism.

…She apparently thought that sounded like a good time.

(I should just write a blog about the stories people tell to relative strangers after having a few cocktails.  Brilliant. I’m serious.)

We also had returning guests Aubrey Aiese (Letterist for Lumberjanes) and Zack Sterling (Illustrator for Adventure time) …the “Boom! Brats” as we at Print Julep refer to them as. (lovingly of course.)  We always have a great time when we see these two, so we were super happy to have them again.

Back to the book: As discussed over dinner, the consensus is, of course, that Chew is AMAZING.  Duh. No surprise there.  But there was something about this book that all of us were trying to put our finger on that brought a sense of comfort.

Joelle pegged it;  it has a very 90’s feel to it. From the Illustration style, to the panels, the way it’s laid out, the colors, and even the type of humor, this comic is very nostalgic for those of us around our 30’s.   It brings us back to a comfort zone of comics, without the teenage angst and anger, but with the sense of hope and even a bit of adolescent goofiness we all miss and sometimes have a hard time making time for anymore.

The world of comics has definitely shifted, and as comics were originally intended,are starting to be geared toward teens again. Teenagers are into much different things now than they were at the start of comics, and even from just ten years ago. Or almost 20 as is the case with the 90’s. (Man that hurts.) A  lot of creators and publishers are just trying to keep up with the times. There’s a lot to be said for innovative storylines as well as offering the cutting edge of artwork and modern styles of storytelling in the comic medium.  But I think sometimes a good formula for success is reaching out and touching a fan base with a past they didn’t realized they were longing for.

Chew is able to do this, with a creative and unique premise, familiar ambiance, relevant conversation, and a comfortable world drawn y Guillory.

All in all, Chew is a lot like that Ladyfinger cake Claire made.. I’m not sure exactly why I like it, I just do. 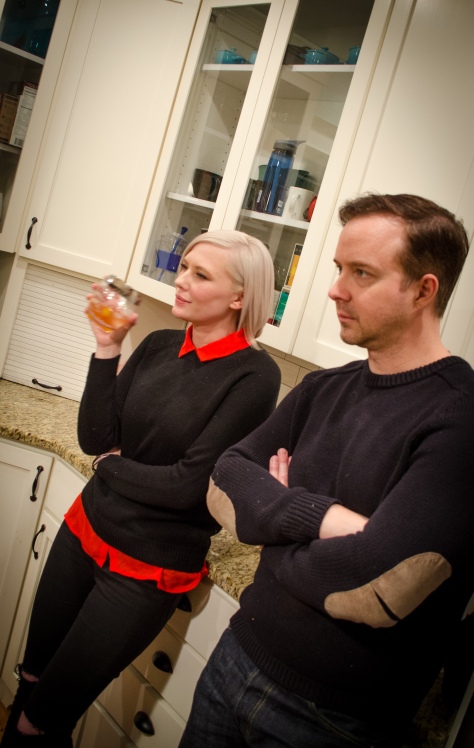 Ladyfingers for dessert.  Because CANNIBALS.

Enough bragging about how awesome our nerdy dinner party was, time to get down to business and give you the recipes for sweet, sweet justice. 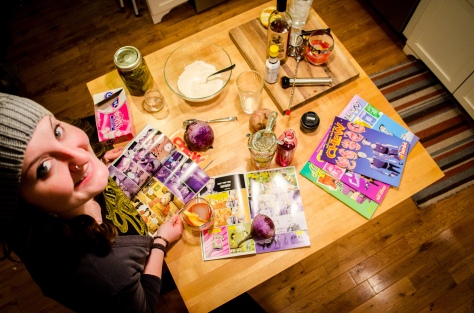 If you didn’t want to watch the video we made while buzzed, with very unsteady camera work, here’s a typed out, more accurate, hand-holding version of how to make this Chew-tastic drink.

The Old Fashioned Beet Down is just a twist on a traditional Old Fashioned.   Instead of a cherry or regular simple syrup, Claire made a beet simple syrup that takes the edge off the bourbon and makes this drink a smooth sail to shitface town.

Stir together in a pot and boil down until the liquid is about 1 cup. Strain the beets out and keep the blood.  BAM.

It also makes your kitchen look like you slaughtered someone.  Feel free to leave it to make a point if you’re pissed at any house mates. 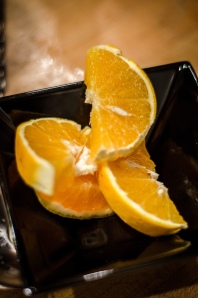 Muddle it together in a pint glass 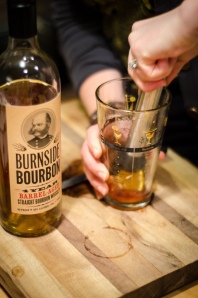 2 oz of Bourbon.  We used Burnside Bourbon by Eastside Distilling in Portland Oregon. Because it’s awesome, and THEY are awesome, because they GIVE IT TO US to use on our show and blog.  So we do.  And it’s a great relationship like that. One where they give and we take, and everyone is happy. 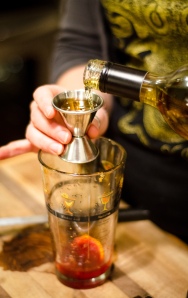 Next step is to throw a scoop of ice into mix and stir it for about 30 seconds to let everything infuse together. Make sure you get all the good stuff on the bottom. (That’s what she said.)

Then you want to skin an orange. Try to cut it so that you get as little of the white stuff on it as possible.

Fold the orange peel in half, and wipe the oil on the rim, then put the peel into the glass with the ice, then pour in the good stuff, (through a strainer always helps. Unless you like’m chunky…. No judging.) 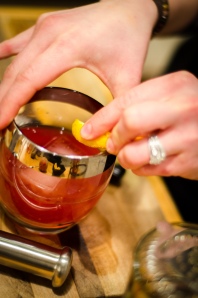 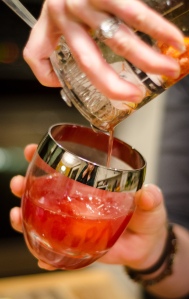 There it is, peeps. We hope the next time you want to impress someone by making a badass cockail, you’ll Chew-z this one!  Hey-o!

For dessert we had some sort of thing with lady fingers and custard, and finished the night off with Cards Against Humanity in the spirit of Tony Chu and how he deals with Crimes Against Humanity regularly.  I wonder what he’d see if he took a bite out of the Dos Equis guy…

Our photo gallery from the night is below. Hope to see you next month for continued Holiday Print Julep Goodnesss.

Until next time… BEET it.

In case you missed it

Comixin' Cocktails. Step 1. Read Comic. Step 2. Throw Dinner Party. Step 3. Randomly invite a someone who works in the Comics Industry to get fed the foods and drink the drinks. Step 4. ? Step 5. Blog & Video.